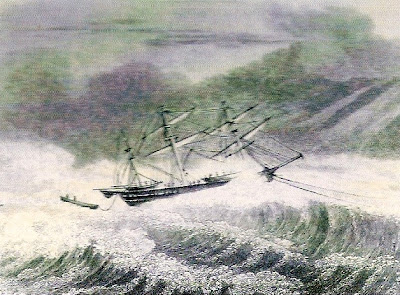 The Iris Hull drama took place on 5 November 1883, at Boi point. The steam ship, with a 1433-ton load and 29 crew members, had left Cardiff en route to India.
That night, a heavy storm was sweeping the coast and they did not see the dim light of the lighthouse at Vilán cape, as visibility was greatly reduced.
When they turned at the cape, at 4 a.m., the ship crashed into the Boi shallows. The crash affected the careening, so the ship flooded and the mizzenmast fell, killing the captain. The ship was in a very delicate position, as the waves constantly broke into it, making it unreachable either by land or sea.
When hearing the news, the Camariñas people tried to help, but they could not do anything because of the sea’s ferocity at the shore.
Nine men who had climbed up and tied themselves to the masts cried desperately for help when seeing the people nearby. Impotence made the men let go of the masts, disappearing in the sea foam. The nightmare lasted a whole day, the men holding tight to the masts, but the night finished it all, destroying the ship and swallowing the masts.
There was only one survivor, George Chirgwin, who, naked and battered, was able to reach the shore.