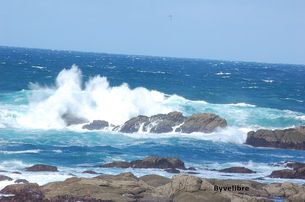 The German steamer Barcelona, victim of the great white blanket that had covered the coast at the end of July 1898, smashed into the Capelo shallows in the entrance of the port of Santa Mariña.
The Barcelona came from Hamburg and was sailing to the city of Málaga with two passengers, a governess to work in the house of some famous German industrialists who lived in San Pedro de Alcántara and the daughter of a very well-known singer from Málaga.
The totality of its cargo: barrels and casks that held wine of great ancestry.
The captain, Mr Mahlmann, a veteran sailor, with precise manoeuvres, gave the order to abandon ship in the lifeboats to the 32 crewmen and the two passengers. When they were rowing close to the coast, they saw, thanks to the first rays of daylight, the faint silhouette of their boat split in two, with part of the stern practically submerged, with the rest of the hull following half an hour later.