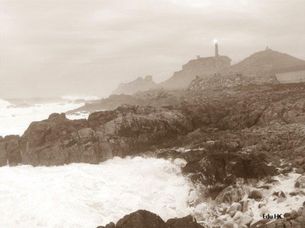 In spite of its name, it was a Spanish steamer. It had left Rouen on 5th January 1895, heading for Alicante, where it would unload sunflower seeds and empty barrels.
When they reached Galician waters, they were taken surprise by a storm which obliged them to take shelter in the Bares roads on the 13th.
The next day, taking advantage of the diminishing squall, they set out for Fisterra, but when they were crossing the Baleas do Tosto, on January 15th, an infernal noise deformed the ship from prow to stern. The misfortune was all-consuming. The propeller had fallen on the stern post and come away definitively, a moment later, and sink to the bottom of the sea together with its shaft. The resulting split resulted in rapid flooding, and sinking was unavoidable. The captain ordered the lowering of the lifeboats, and they were rescued by the boat Cabo Prior.